Few words before the beginning

To be a volunteer. What does it mean? I’m sure this is not the first time youhear this question. Maybe someone close to you has decided to be onerecently. Maybe you are working in this huge —and I’d say unknown—world. Or maybe you are a volunteer. Even if you were one in the past,you’re still being. This is something that will go with you forever. Why? Forme it’s quite easy: I believe we all are like a milkshake. Weird? Well, let meexplain myself.The main idea behind this metaphor —not all the metaphors are purepoetry— focuses in that every person is the mix between themselves andthe experiences they live throughout their whole existence. So we all wereborn as milk, but every friend we make, every special situation —both badand good— we go through… They change us. I could say that my mateDavid is a peach; my time in Poland, a banana; the day I met mycoordinator and partners, a couple of cherries. Whatever. You get it, right?I take it all —fruits and milk—, shake… And here I am. That’s why I’ll be avolunteer forever.The text you will find under these lines is one of those fruits, thoseexperiencies. It really changed me, and I hope it open your eyes too, so youcan see who you really are and what’s your role in the world you’ve had tolive. Or at least that it makes you think a little bit. That’s up to you. I onlyhave one advice: taste your time slowly, like that superexpensive cup ofwhisky —if you are in Poland, it’ll be probably vodka— you ordered lasttime you were with your friends. Enjoy each moment, because everythinghas an end. The only things humans regret are those they don’t face to, soencourage yourself, be brave. It’s never too late.

Inclusion as the only solution for a heartless society

Sometimes I think we are not good enough. We defend lax ideas, create flamboyant and irritating speeches, load our fountain pens with bullets just to make noise. When it comes to facing the reality, we do everything in our power to show our interest. The question is: are we really interested or is it simply a way to calm the drowned scream of our consciences? 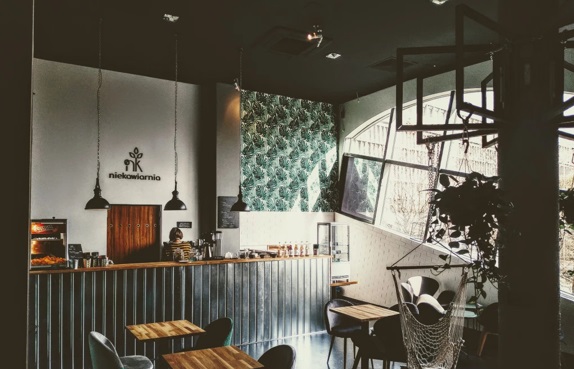 The naturalistic decoration, in green and white tones, reminds us we are in a place that takesgreat care of food

This reflection is not empty. Policy always places the inclusion of the most disadvantaged groups among the important issues on its agenda, but rarely cares about moving it to a real context. When it’s time to do things, ideas slip between the fingers like grains of sand. And that applies to society as a whole, to all of us. That’s why I like so much the vision of the Niekawiarnia, a small cafe with the only goal to give an opportunity to those who, for the stupid reason of being different, have been denied everything.

Located inside the same building that houses a charming cinema, Niekawiarnia identifies itself as a hundred percent vegetarian place where you can have a drink between film and film. Just look at the decoration, with a strong predominance of green and white, to realize about it. Tables, made of a veined wood that melts light and dark tones, follow this trend. The subtle thing becomes evident if we look at some of the books that decorate the walls: ‚One hundred vegetarian recipes’, ‚A life without meat’ or ‚God Food’ are just some of the titles.
Perhaps the peace that is breathed is due to the fact that the place is completely empty at this time in the morning —there is no screening until the afternoon—, an affirmation that is quickly denied by Khasia, who welcomes us with big and as expressive as a baby’s laugh eyes. She reveals to us the true mission of the Niekawiarnia, its kind nature in search of equality. It’s a ‚nonprofit’ cafe, so the benefits are destined exclusively to pay workers’ salaries and to cover the expenses derived from the purchase of raw materials and the maintenance of the premises. 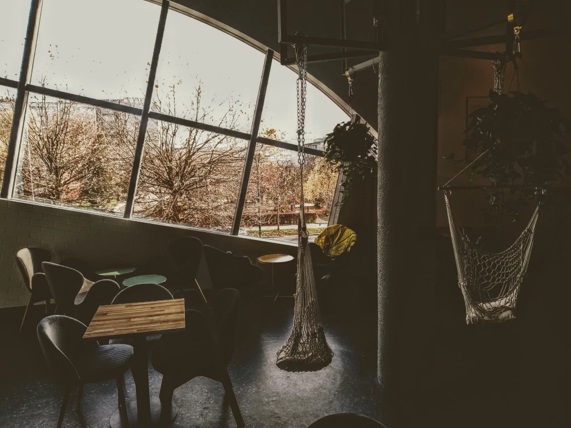 Niekawiarnia is an ideal place to relax, have a drink between film and film and forget abouteveryday stress

The project is only a few months old, but it has settled with unusual ease as a benchmark for the restaurant bussiness in Katowice. At least that suggests Khasia, who explains with a smile on his lips that there are already many loyal customers, from families with children to enthusiasts of the seventh art. The location of the place, just five minutes on foot from the city center, is one of the reasons of this success. Perhaps also the human component: all employees suffer from some kind of mental disorder, from schizophrenia to bipolarity or depression. This statement makes me think, with some hope, that our hearts still work.
Between word and word, I sip a terrific coffee. It’s one of those who don’t need a drop of sugar to mitigate the bitter nature of the grain. It slides down the throat like a silky and iridescent lava river, a sensation more than pleasant if we consider the polar cold outside. Khasia notices my surprised face and pulls the sack of coffee from behind the bar. „Smell it,” she says. My lungs are filled with lived moments, nostalgia begins to travel through my veins. Is it, perhaps, the memory of my mother making coffee in the oldest pot in the world when I was just a child? 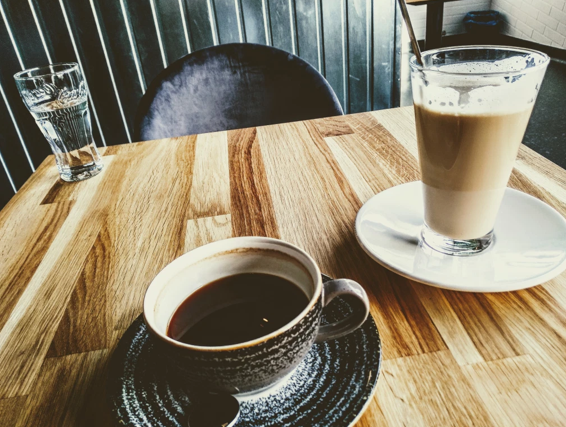 Coffee’s aroma transports me to my sweetest childhood, when my mother prepared it in theoldest pot in the world

It’s true that Niekawiarnia’s menu is not especially big, but it does have options for all tastes. In our case, we start with some gluten-free nachos. One realizes the extent to which food engineering has advanced when trying something as simple as a corn tortilla for coeliacs and find that the taste is practically identical to the original. After verbalizing my thoughts with Khasia, she tells me that she has a private provider that brings her the nachos every week. The sauce that accompanies them, in which green pepper prevails over tomato, is another good sample of the product’s quality: fresh, homemade and delicious. 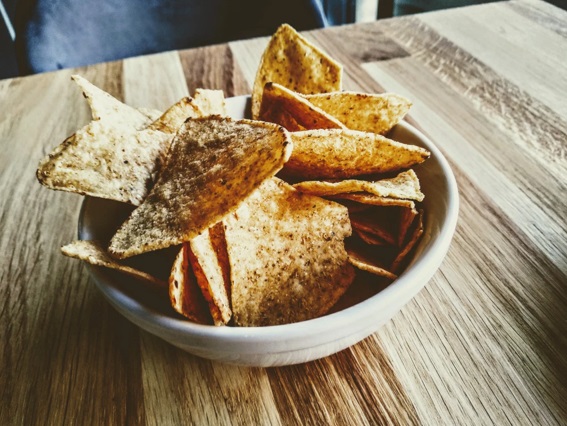 If they told me that the nachos were freshly made, I would believe it: crispy, tasty and with theright point of salt

We devour the nachos while discussing about Poland’s current situation. Obvious and recent victory of PIS in the national elections is followed by other main topics, among which the questionable public transport service between the different cities that make up the Silesia region stands out. Khasia complains without any qualms, and I cannot help but understand it: even though the distance between Sosnowiec —where I live— and Niekawiarnia is only eleven kilometers, it took me more than an hour to arrive. First world problems.
After a five-minute break, our hostess returns with a sandwich carefully cut in two halves. Creature of habits, I bring my nose to the plate to appreciate the aromas and discover, with joy, that nothing has to do with each other. Strong notes of pesto and spicy dried tomato emanate from the first. A tender and juicy mozzarella cheese completes the composition, so the feeling is to be eating a caprese salad in the form of a sandwich.
As for the other half, the first thing that turns out is a strong smell of goat cheese. This is confirmed upon coming into contact with the palate, where the sweetness of the honey is perceived, as well as the dryness of the nuts, which provides a crunchy counterpoint to the creamy texture and, in a way, cloying cheese. What at first seemed like a salty lunch ends up becoming an unexpected mix of flavors, but equally interesting and successful.

A caprese salad and a goat milk yogurt with honey and nuts. Who said sandwiches are obsolete?

We would love to keep talking to Khasia, but it’s getting late. More than two hours have passed and we have barely noticed. Time is capricious, both for good and for bad. We take our stuff and go to the door, escorted all the time by his tender and illuminating look. It’s her eyes what make me realize that our skills or disabilities do not matter, but what we do with them. Just as a seer is able to see beyond the physical, a blind man can become his misfortune into an instrument to change the world. It’s all a matter of he believes it and that, above all, others have the ability to believe in them.